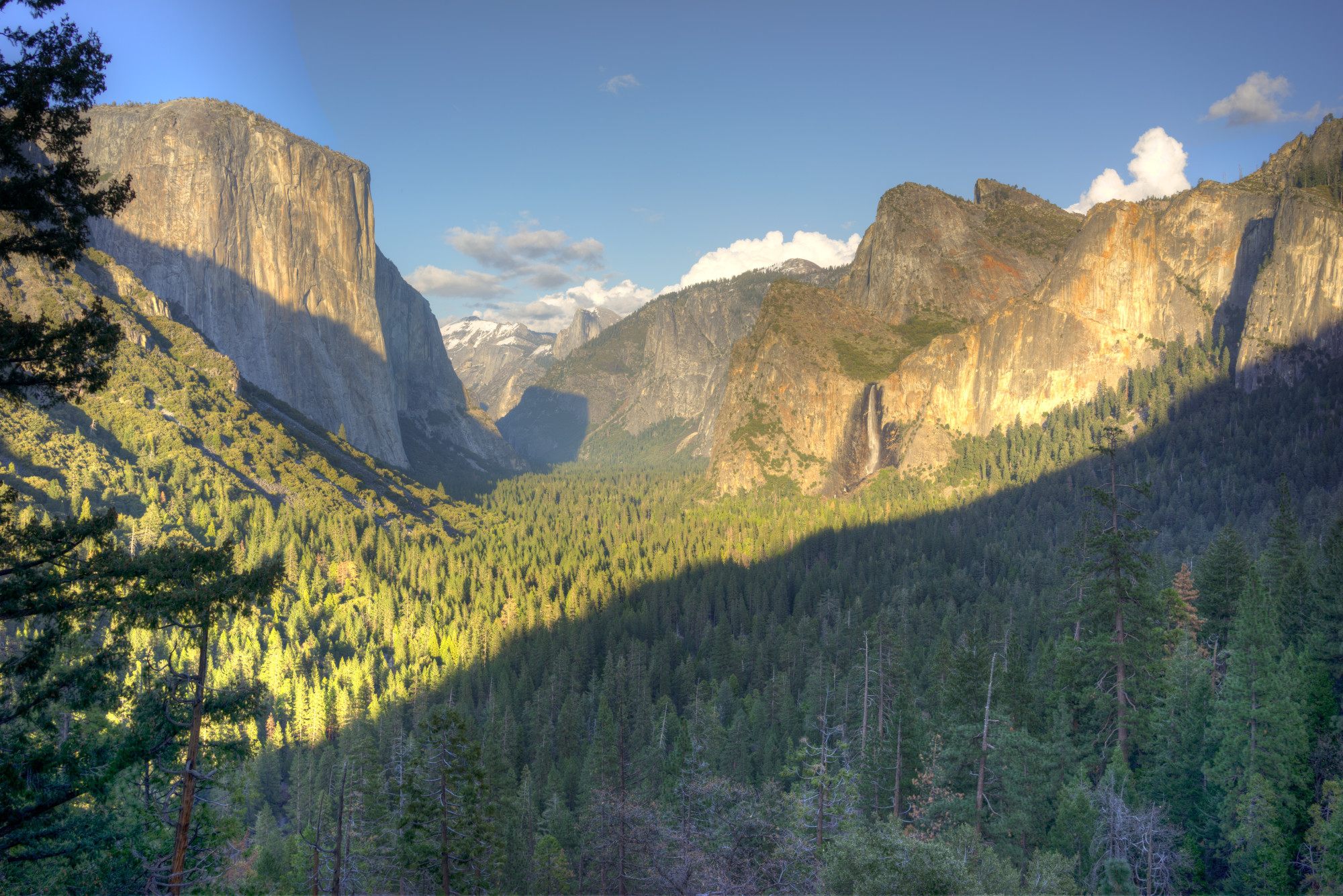 I’ve always wanted to see Yosemite, but after watching America’s Best Idea, the Ken Burns documentary series on the creation of the National Park Service, I became even more determined to find an excuse to visit. Knowing that a recent trip to Los Angeles for work was the closest I was likely to get for a good while, I started Googling around for day trip itineraries.

Unfortunately, there weren’t many to be found. A few people had put together some ideas for short weekend trips to Yosemite from the Bay Area, but for the most part, there were just lots of people commenting that it was impossible to do justice to Yosemite in a single day. One pithy quote in particular was reproduced just about everywhere:

Madam, I’d go sit by the Merced River and cry.
— Carl Sharsmith, former park ranger, on what to do with only one day in Yosemite

Ultimately, I was able to put together a somewhat more productive (albeit very long) day. It was definitely a whirlwind tour, but I was able to see most of the major sights, get in a few hours of hiking, and make it back to Los Angeles less than 24 hours after I left. A success, then, by my accounting.

I’m reproducing my improvised itinerary here for the benefit of others desperate or foolhardy enough to attempt a similar endeavour.

4:30am: Depart LA
Any attempt to pull this off in one day requires an early start: the entrance to Yosemite is a solid five hour drive accounting for traffic and fuel stops. Also, CA-99 is one of the most miserably boring stretches of road imaginable.

9:30am: Arrive at Yosemite / Wawona
Coming from LA, you’ll arrive at the southern entrance to Yosemite, about an hour’s drive from the main attractions of Yosemite Valley. By this point, you’re probably quite sick of driving, so stop at the Wawona Store (just a few miles down the road from the park entrance) to grab some snacks, stretch your legs, and use the toilets. There’s also a summer-only visitor’s center. 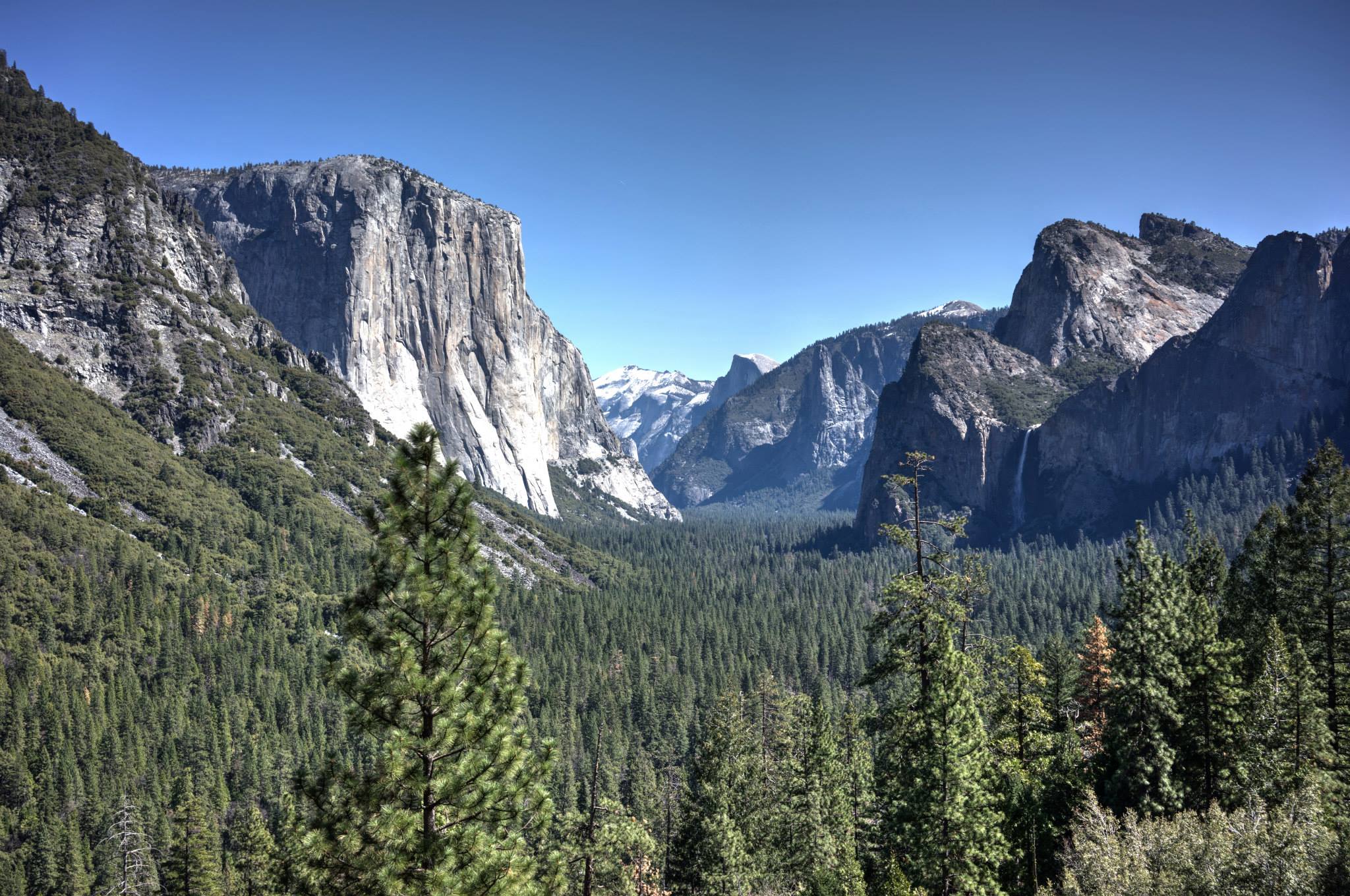 11:00am: Tunnel View
This is the canonical view of Yosemite Valley, about an hour or so down the road from Wawona immediately after passing through the tunnel (hence the name). From this scenic overlook, you can see El Capitan, Half Dome, and Bridalveil Fall. Without this photo, you’ll never manage to convince your friends that you’ve actually been to Yosemite. There’s limited parking, but people don’t tend to linger too long so spaces open up quickly.

11:30am: Bridalveil Fall
Just over a mile down the road from Tunnel View is the 620 foot (190 metre) tall Bridalveil Fall. While the best views of the fall are actually from elsewhere in the valley, it’s more than worth the short ten minute hike from the parking lot to see (and hear!) it up close. Especially in the spring, when flow is at its peak, expect to get drenched with spray. 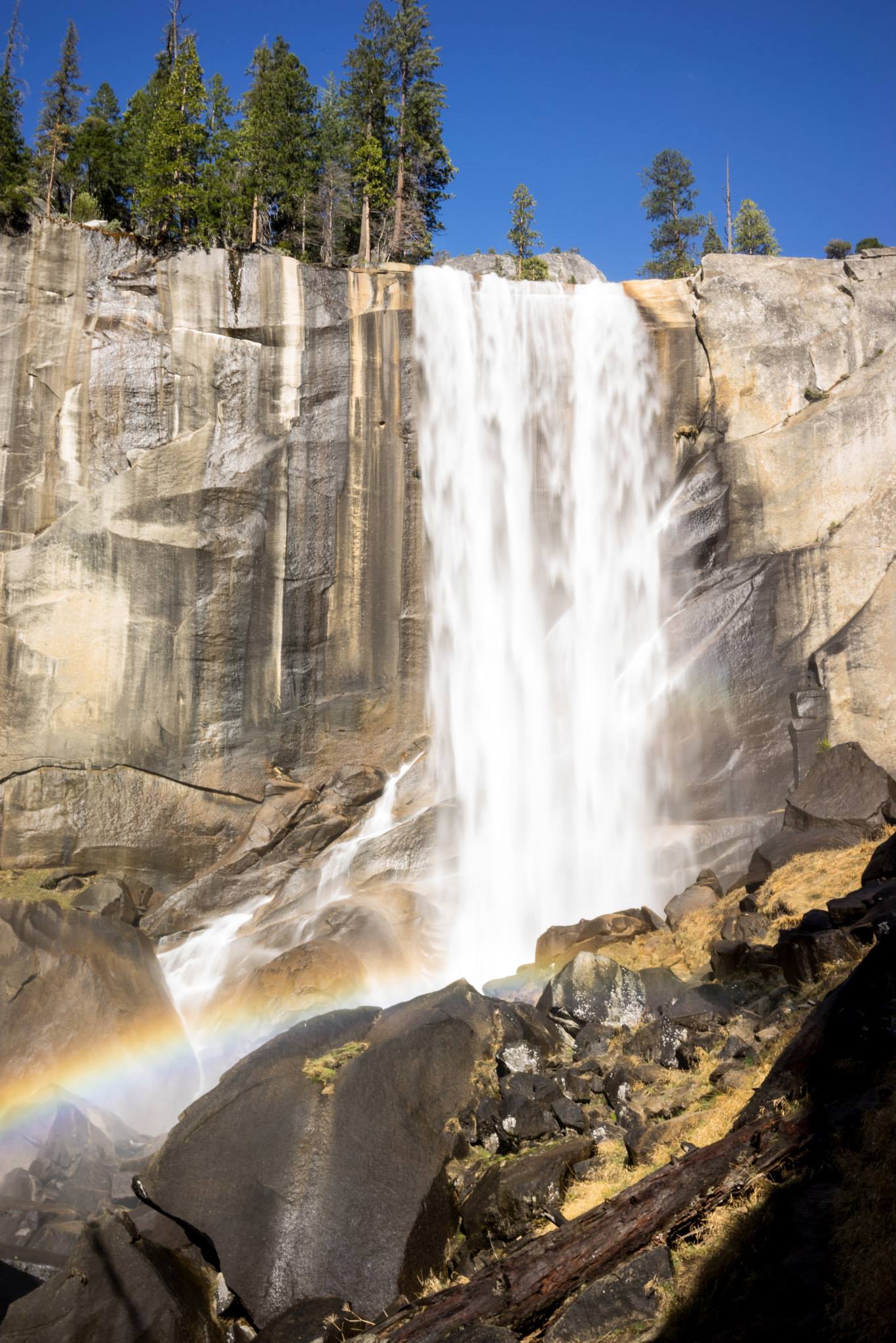 12:30pm: Vernal and Nevada Falls / Mist Trail
To me, no visit to a national park is complete without a proper hike. Yes, this means cutting back on the number of park-take-a-photo-and-leave stops, but is very, very worth it.

I chose the ever popular Mist Trail, a relatively short (6.5 miles) but moderately strenuous (1,900’ elevation gain) trail to the top of Vernal and Nevada Falls. Perhaps Yosemite’s most famous hike, you’ll pass stunning views, following the Merced River as it careens over a combined 900’ of waterfalls on its path to the valley. The top of Vernal Falls, around 1.5 miles from the trailhead, makes a great place to pause for lunch (remember to pack out your trash). Following the John Muir Trail on the return, you’ll also get an incredible view of Liberty Cap, the back of Half Dome, and Nevada Fall.

I completed the hike in around four and a half hours, including lots of stops for photos, and as long as you’re in reasonably good shape, you should be able to do the same. Beware of the narrow, slippery steps carved into the rock along the falls; quite a few people have plunged to their deaths over the years. Expect to get drenched by spray from the falls—this is called the Mist Trail for a reason! 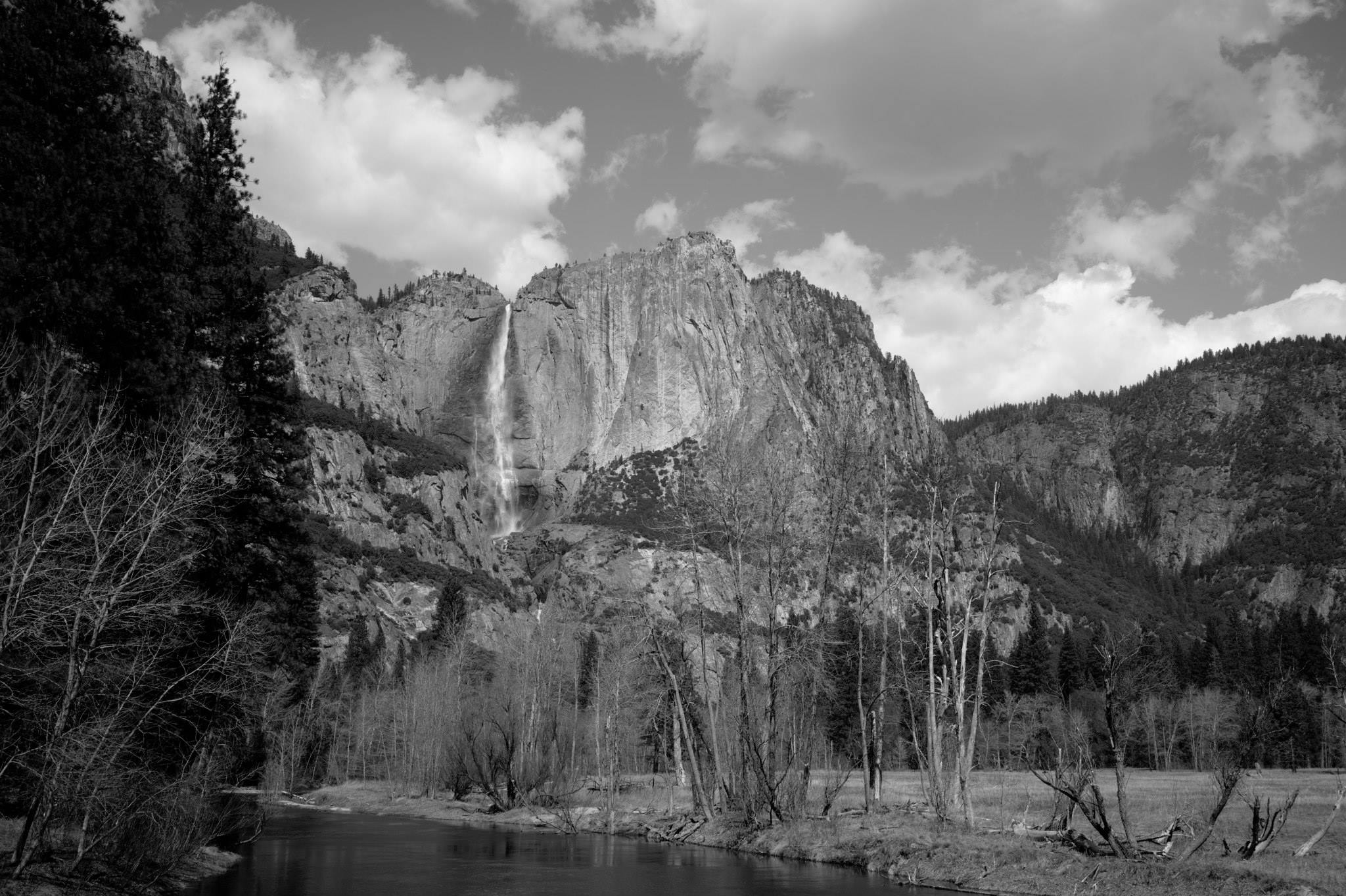 5:30pm: Yosemite Falls
While you can see Upper Yosemite Falls from many locations in the valley, it’s worth taking the short half-mile round trip hike to the 320 foot (98 metre) high Lower Yosemite Falls, which you’d otherwise miss. The woods between the road and the base of the falls aren’t particularly scenic, particularly in comparison with the Mist Trail, but the reward at the end is worth it. In the spring, the roar of the falls is deafening. There’s a parking lot available at the trailhead.
7:00pm: Glacier Point
Arguably the most scenic spot in the park, particularly at sunset. You’ll enjoy panoramic views: the valley, Half Dome, Clouds Rest, Yosemite Falls, and the Yosemite high country. There’s a cafeteria and gift shop near the parking lot, so it’s a great place to stop for dinner before taking the half mile walk to Glacier Point itself. Find a spot to settle in and watch the sun go down, and don’t forget to bring your camera. Stick around if you like for some great stargazing.
Be forewarned that the road to Glacier Point is only open from April – October.
9:30pm (or later): Return to LA
This is a day trip, after all, so at some point it becomes time to leave the beauty of Yosemite behind and head back to LA. Stock up on Red Bull (or your other caffeine delivery mechanism of choice) for the drive back… you’ll need it.

Alex Warofka works at the intersection of human rights and technology, with a focus on content regulation and the role of social media in conflict. He is currently Product Policy Manager for Human Rights at Facebook.

This site uses Akismet to reduce spam. Learn how your comment data is processed.